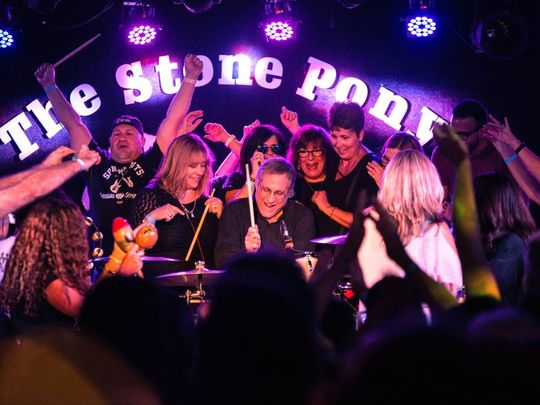 The Boss may be on Broadway, but the beat certainly goes on for Max Weinberg.

His Max Weinberg’s Jukebox is a hit across the country and it makes a return visit to the Stone Pony in Asbury Park on Saturday, June 16.

“I don’t know what taking a break means, I’ve never taken a break,” Weinberg said. “To me, it’s all a continuum, whether it’s Bruce (Springsteen) and E Street Band, which of course is my first love, or playing on my own, I don’t stop. I don’t see any reason to stop, I enjoy it. I  get a lot of satisfaction from the fact that I’m 67 and I’m still doing it, and people enjoy themselves and I play different things on the drums every night. I challenge myself. I never really thought about not playing, like some arbitrary retirement age. I don’t think musicians do that.”

Video screens on stage have a list of ’60s and ’70s rock and soul songs Weinberg and his band, Glen Burtnik, Bob Burger and John Merjave, three-fourths of the Weeklings, will play as audience members make requests at the Jukebox shows. Weinberg, who starred on TV’s “Late Night with Conan O’Brien” and “The Tonight Show with Conan O’Brien,” also goes into the audience to take requests personally.

“I’m having a blast,” Weinberg said. “l don’t think we’ve had the same set list for two nights, it’s so interesting. You never know what they’re going to ask for and the band, with Glen, Bob and John. They’ve gotten so good they can turn on a dime.”

The show is a little bit like the segment of E Street Band shows when Springsteen surveys the song requests on audience members’ signs.

“I know people who stopped playing and they can’t play anymore,” Weinberg said. “If you stop, there’s a point at which you don’t get it back, and that’s happened to people and that’s something I’m acutely aware off and frankly have worked so much in my life to avoid.”